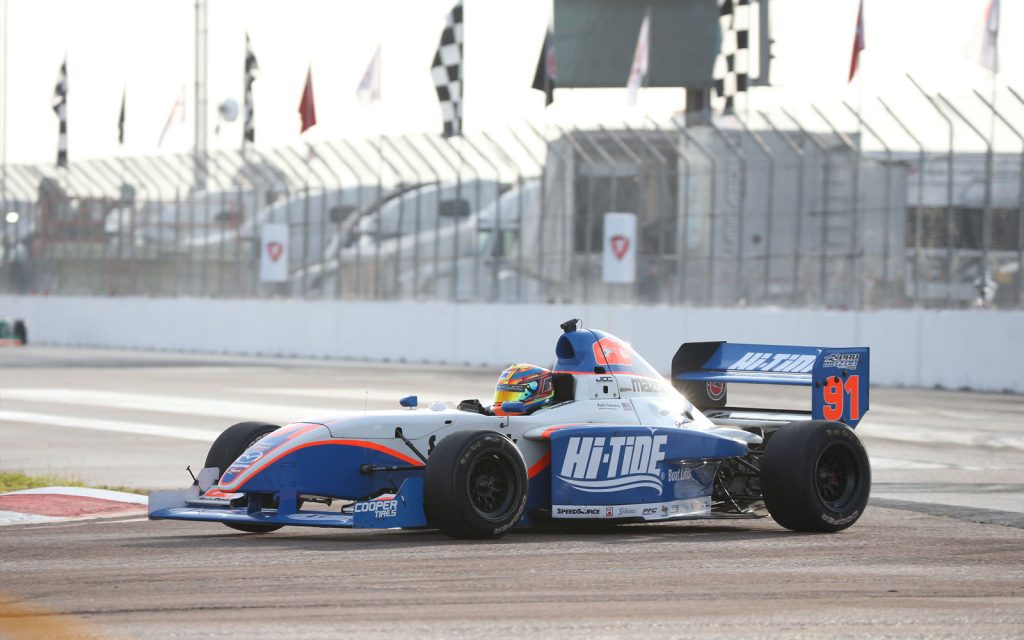 PALMETTO, Fla. (June 11, 2015) – Hi-Tide Boat Lifts continues to expand its motorsports presence with today’s announcement that the Ft. Pierce, Fla.-based company will be an Official Partner of the Mazda Road to Indy. The three-year agreement will comprise each level of the premier driver development ladder – Indy Lights Presented by Cooper Tires, the Pro Mazda Championship Presented by Cooper Tires and the Cooper Tires USF2000 Championship Powered by Mazda – and will kick off with the next rounds of competition for all three series on the streets of Toronto June 12-14.

Hi-Tide Boat Lifts’ initial foray into racing began earlier this year when the company announced title sponsorship of the #91 JDC MotorSports Pro Mazda entry piloted by Kyle Connery, 24, of Vero Beach. The sponsorship is part of the 36-year-old company’s initiative to “lift” communities and encourage them to pursue their dreams.

A leader and pioneer in the boat lift manufacturing industry, Hi-Tide’s partnership will encompass multiple platforms including branding, event title sponsorship and contingency awards through 2017. A key component of its involvement will include the hosting of inspirational activities for local Boys & Girls Club of America children at race events.

“We are very pleased to welcome the Hi-Tide Boat Lifts team to our partnership lineup for all three series,” said Dan Andersen, Owner and CEO of Andersen Promotions. “People are very passionate about boating just like they are about racing so there is already a lot of synergy between our camps. We look forward to growing our new relationship.”

Hi-Tide operates one of the largest boat lift manufacturing facilities in the United States and has a dealer network of 240 professionals covering 21 states as well as Canada and the Caribbean.

“Our mission is to be a safe, passionate, fun part of your boat ownership experience,” said Craig Wood, President of Hi-Tide Boat Lifts. “When we create a great experience for our customers and anyone else who interacts with us, the world becomes a better place. Hi-Tide raises all ships.”

All three levels of the Mazda Road to Indy will be in action on the streets of Toronto with doubleheader rounds on Saturday and Sunday, June 13/14, in support of the Verizon IndyCar Series. Indy Lights will feature same day race coverage on NBCSN at 2:00 pm ET Sunday and live coverage on IMS Radio Network to Sirius XM Satellite Radio, indycar.com, indycarradio.com and the INDYCAR app from Verizon. Live timing and commentary for all three series is available on the Mazda Road to Indy App with behindthe-scenes features on RoadToIndy.TV. The USF2000 Toronto rounds will be featured in one of four NBCSN highlight shows which will include Pro Mazda racing from the Mid-Ohio Sports Car Course.

About Hi-Tide Boat Lifts: Hi-Tide Boat Lifts is a pioneer in the boat lift industry, as the first manufacturers to design a product entirely of corrosion-resistant aluminum made specifically for the marine environment. As the leaders and innovators in the boat lift industry, the company also developed a patented “Gear Drive” gear box, which guarantees years of low maintenance service. Learn more at: http://www.hi-tide.com.

About Andersen Promotions: Andersen Promotions has a long and successful background in promoting open-wheel championships and has also owned multiple race teams, including an Indy Lights team, in the past. The company relaunched the Cooper Tires USF2000 Championship Powered by Mazda in 2010, which it operated from 1992 through 2001. In December of 2012, Andersen Promotions founded the Pro Mazda Championship Presented by Cooper Tires to replace the void left by the Star Mazda Series which ceased operations after 22 years. On July 12, 2013, it was announced that Andersen Promotions would take over the licensing and operation of the Indy Lights Series from INDYCAR and now operates all three levels of the Mazda Road to Indy. For additional information, please visit www.indylights.com, www.promazdachampionship.com and www.usf2000.com.